Cars, planes, trains: where do CO2 emissions from transport come from? (Engels)

Transport accounts for around one-fifth of global carbon dioxide (CO2) emissions [24% if we only consider CO2 emissions from energy].(1) How do these emissions break down? Is it cars, trucks, planes or trains that dominate?

In the chart here we see global transport emissions in 2018. This data is sourced from the International Energy Agency (IEA).

Road travel accounts for three-quarters of transport emissions. Most of this comes from passenger vehicles – cars and buses – which contribute 45.1%. The other 29.4% comes from trucks carrying freight.

Aviation – while it often gets the most attention in discussions on action against climate change – accounts for only 11.6% of transport emissions. It emits just under one billion tonnes of CO2 each year – around 2.5% of total global emissions [we look at the role that air travel plays in climate change in more detail in an upcoming article]. International shipping contributes a similar amount, at 10.6%.

Rail travel and freight emits very little – only 1% of transport emissions. Other transport – which is mainly the movement of materials such as water, oil, and gas via pipelines – is responsible for 2.2%. 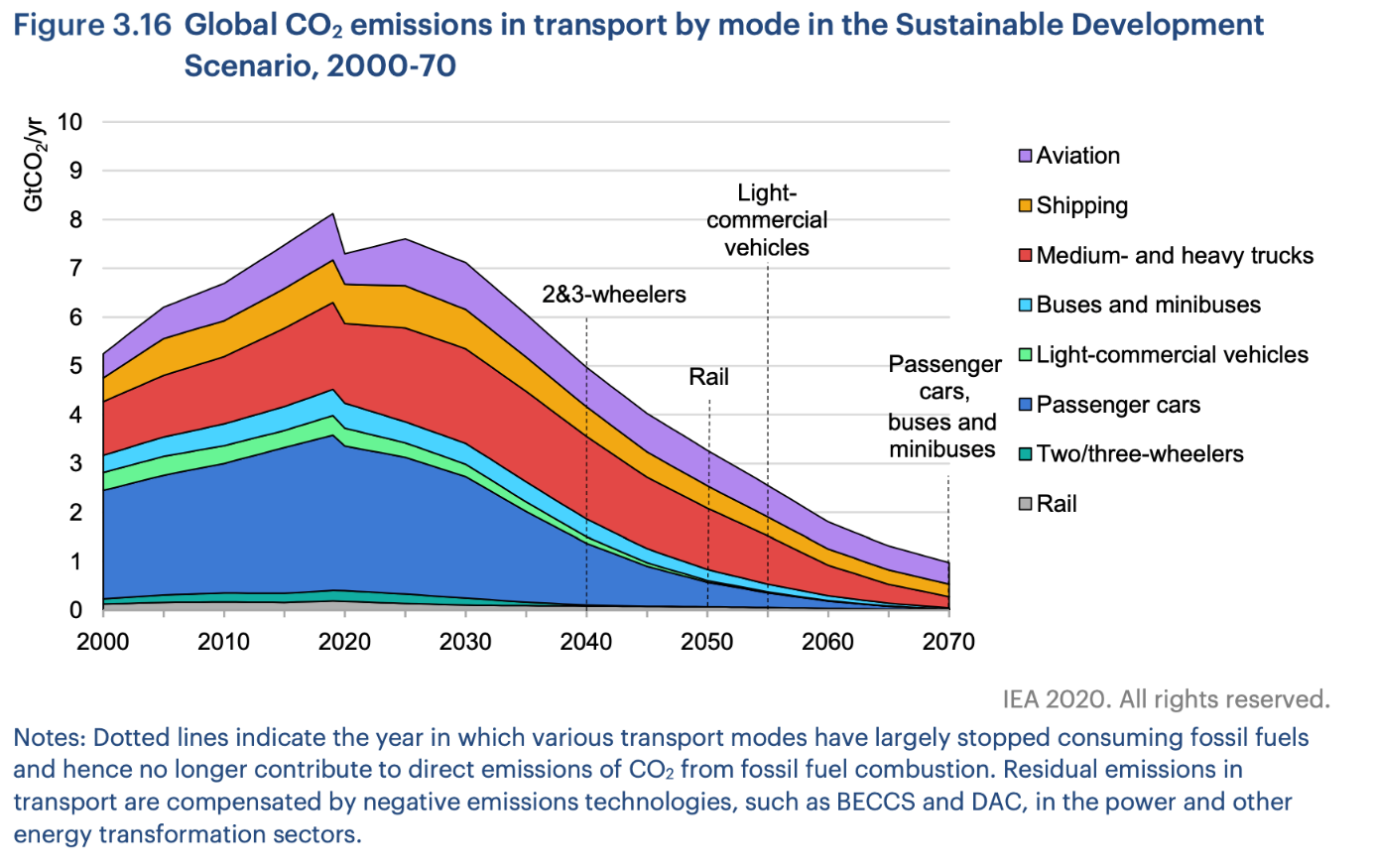 Towards zero-carbon transport: how can we expect the sector’s CO2 emissions to change in the future?

Transport demand is expected to grow across the world in the coming decades as the global population increases, incomes rise, and more people can afford cars, trains and flights. In its Energy Technology Perspectives report, the International Energy Agency (IEA) expects global transport (measured in passenger-kilometers) to double, car ownership rates to increase by 60%, and demand for passenger and freight aviation to triple by 2070.(2) Combined, these factors would result in a large increase in transport emissions.

But major technological innovations can help offset this rise in demand. As the world shifts towards lower-carbon electricity sources, the rise of electric vehicles offers a viable option to reduce emissions from passenger vehicles.

This is reflected in the IEA’s Energy Technology Perspective report. There it outlines its “Sustainable Development Scenario” for reaching net-zero CO2 emissions from global energy by 2070. The pathways for the different elements of the transport sector in this optimistic scenario are shown in the visualization.

We see that with electrification- and hydrogen- technologies some of these sub-sectors could decarbonize within decades. The IEA scenario assumes the phase-out of emissions from motorcycles by 2040; rail by 2050; small trucks by 2060; and although emissions from cars and buses are not completely eliminated until 2070, it expects many regions, including the European Union; United States; China and Japan to have phased-out conventional vehicles as early as 2040.

Other transport sectors will be much more difficult to decarbonize.

In a paper published in Science, Steven Davis and colleagues looked at our options across sectors to reach a net-zero emissions energy system.(3) They highlighted long-distance road freight (large trucks), aviation and shipping as particularly difficult to eliminate. The potential for hydrogen as a fuel, or battery electricity to run planes, ships and large trucks is limited by the range and power required; the size and weight of batteries or hydrogen fuel tanks would be much larger and heavier than current combustion engines.(4,5)

So, despite falling by three-quarters in the visualized scenario, emissions from these sub-sectors would still make transport the largest contributor to energy-related emissions in 2070. To reach net-zero for the energy sector as a whole, these emissions would have to be offset by ‘negative emissions’ (e.g. the capture and storage of carbon from bioenergy or direct air capture) from other parts of the energy system.

In the IEA’s net-zero scenario, nearly two-thirds of the emissions reductions come from technologies that are not yet commercially available. As the IEA states, “Reducing CO2 emissions in the transport sector over the next half-century will be a formidable task.”(6)

1) The World Resource Institute’s Climate Data Explorer provides data from CAIT on the breakdown of emissions by sector. In 2016, global CO2 emissions (including land use) were 36.7 billion tonnes CO2; emissions from transport were 7.9 billion tonnes CO2. Transport therefore accounted for 7.9 / 36.7 = 21% of global emissions.